Welcome to another edition of our TSANZ Research Roundup. It was fantastic to see so many people tune-in to our first ever virtual conference earlier this month. I would like to offer a huge congratulations to everyone who has continued to champion respiratory research by adapting approaches and pushing through despite the COVID-19 pandemic. The presentations on display were testimony to our society of dedicated and steadfast professionals.

I am honoured to be taking over as Chair of the Research Sub-Committee from Professor Sandy Hodge, who has done a brilliant job of leading our collective interests over the past four years. If there is anything the committee or I can do to help support your research activities, please do not hesitate to get in touch.

We are please to announce that over $300,000 has been awarded for respiratory research excellence in 2021. Huge congratulations to all the award recipients and good luck with your research. Two awards are currently open, being a TSANZ and National Asthma Council Australia Career Development Fellowship and a NZ Branch travel grant closing 31st of May and 8th of August respectively. There is an Asthma Australia Research Grant and Workshop on offer later this month and calls for applicants in the 2021 Australian Museum Eureka Prizes are open until the 28th of May.

Check out The Limbic, Respirology Editor’s Choice and Respiratory Research Review segments for a snapshot of some great respiratory research going on. Finally, if you have an interest in lung cancer care, acute exacerbations of COPD or helping to inform the top 10 research priorities for pulmonary fibrosis, click on the survey links below.

Enjoy the May edition of your Research Roundup.

(Saturday, 1st May 2021): Over $300,000 in lung research investment was announced this weekend at the Respiratory Research Excellence Awards, presented in a virtual format alongside the Australia and New Zealand Annual Scientific Meeting for Leaders in Lung Health & Respiratory Science (TSANZSRS 2021).

This prestigious selection of awards are presented to TSANZ members who are at various stages of their career and doing outstanding work. These awards aim to support individuals through project funding, fellowships and travel grants.

“This funding enables our researchers to learn more and develop their skills, with the overall goal of preventing, curing and alleviating disability from lung disease. Every dollar invested takes us one step closer to reaching that goal,” said TSANZ President Elect Professor John Upham.

“We’re honoured to be able to support some of Australia’s most innovative researchers working on lung disease and lung health. This research will make a difference to the lives of the 1 in 4 Australians with lung disease,” he said.

Thoracic Society of Australia and New Zealand (TSANZ) – the hosts of TSANZSRS – are pleased to announce awards from Cystic Fibrosis Australia, the National Asthma Council Australia, Lung Foundation Australia and the Centre of Research Excellence in Pulmonary Fibrosis.

“The TSANZ is privileged to support a diverse awards program that recognises the best and brightest minds in respiratory health that will shape the lung health of our communities into the future” said TSANZ CEO, Dr Graham Hall.

The research awards are supported by the generosity of private donations, sponsorship and leveraged financing from recipients’ institutions. Thank you to our generous sponsors and organisational partners for enabling our world-class researchers to continue to create respiratory knowledge and build capacity in the respiratory workforce, with the overall goal to prevent, cure and relieve disability from lung disease.

TSANZ would like to congratulate the following Award winners.

Past President’s Scholarship Award – Elena Schneider-Futschik, The University of Melbourne

Asthma Australia would like to invite you to a workshop which aims to share ideas and invoke research partnerships around issues relevant to people disproportionately affected by asthma. At the end of the meeting, Asthma Australia will re-announce a $300,000 Strategic Alliance grant for such work.

At Asthma Australia, we are committed to doing things differently in our quest to help people live freely from their disease and hope you are ready to join us. Thanks to the Ray O’Donnell Belgrave Lions Asthma Research Fund, we are seeking to fund research from Victorian-led research collaborations to answer the evidence gaps and develop solutions for people from the three following population segments disproportionately affected by asthma:

We will be holding one workshop (up to 90 minutes) for each population segment and want you to attend.

At the workshops you will hear why this research funding is a priority in Australia for people with asthma. We will facilitate a discussion among participants about why these inequities persist and share ideas around potential collaborations and novel approaches that aim to address them. After the workshops, applications will open to apply for the $300,000 Strategic Alliance Grant.

If you are interested in applying for this grant, please contact Asthma Australia (via research@asthma.org.au) with your name, organisation and the workshop you would like to attend.

Do you know someone making a difference in their field?

Entries to the 2021 Australian Museum Eureka Prizes are now open!

This year, there are 16 prizes on offer that cover a broad spectrum of scientific disciplines, which aim to recognise the achievements of scientists, researchers, and science communicators at all career stages.

There are prizes available for both individuals and teams, and entrants can either enter themselves or be nominated. The Eureka Prizes are open, but not limited to, those who work in research institutes, government departments, media, corporations, and universities. It’s free to enter and there’s a prize pool of $160,000 to be shared between the winners.

If you know an individual or team doing outstanding work, why not encourage them to enter?

The following articles will take you to thelimbic.com

Podcast: Covid-19’s toll on the mental health of doctors in Australia revealed

Patients describe the benefits and limits of mAbs for severe asthma 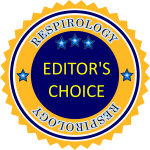 Prednisolone and tacrolimus versus prednisolone and cyclosporin A to treat polymyositis/dermatomyositis‐associated ILD: A randomized, open‐label trial

We would be grateful please for less than 5 minutes of your time to complete this survey which is designed to provide a snapshot of the current status of lung cancer care and MDTs around Australia.

Please follow the link to the Australian-wide Survey of Lung Cancer Care, or use the QR code below.

Thank you for your time. 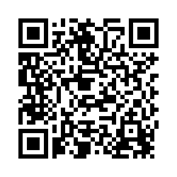 Investigators from Monash University are conducting a RACGP-funded national survey of GPs regarding the management of patients with acute exacerbations of COPD.

Acute exacerbations of COPD are a leading cause of hospitalisation, with a substantial proportion of cases being potentially preventable. We are seeking GPs to complete a short survey that aims to better understand current practice and unmet needs in order to optimise care for these patients. Due to the current COVID-19 vaccination rollout across Australia, it is very challenging to secure participation. Any assistance to distribute this among your contacts is greatly appreciated.

The survey can be accessed by clicking HERE.

The survey has been approved by the Monash University Human Research Ethics Committee (MUHREC ref. 26571). If you have any queries, please contact Dr Bianca Perera at bianca.perera@monash.edu, Dr. Chris Barton at chris.barton@monash.edu or Dr Christian Osadnik (Principal investigator) at christian.osadnik@monash.edu.

A recent research study as part of the NHMRC’s Centre of Research Excellence in Pulmonary Fibrosis grant aimed to identify the top 10 research priorities for pulmonary fibrosis (PF) according to people living with pulmonary fibrosis, caregivers, health professionals and researchers.

This study has now been completed and below is a summary of the findings from this work. 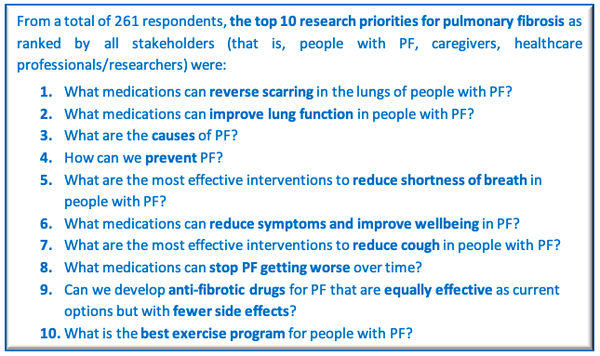 The top 3 priorities rank by people with PF and caregivers were:

The top 3 priorities rank by people with healthcare professionals/researchers were:

The findings from this study have been published in a peer-reviewed journal and will help guide future research directions.

The Study team extends their thanks and appreciation to all those who participated in the study for their time and valuable contribution to this work.

The TBPod are podcasts designed for clinicians and policymakers with an interest tuberculosis. These podcasts consist of conversations with expert clinicians, researchers, policy makers and advocates about their work in the field of tuberculosis. The TBPod is prepared by ACTnet and the TB Forum and can be found on ITunes, Spotify, and the ACTnet Website.

Can you help TSANZ make a difference?

Your support makes a difference, and helps us continue to provide funding for research and our TSANZ awards. If you would like to support our work, you can leave a tax deductible donation of your choice in our areas of need.

1. Making a donation to our Benevolent Fund

The Benevolent Fund supports projects aimed at improving the respiratory health care of individuals who are in a setting where health care resources and delivery are poor.
CLICK HERE to make a donation or by filling out the Support TSANZ form. Once you have completed the form, please email TSANZOffice@thoracic.org.au.

2. Making a donation to support research

With your support, we can continue to support Australia and New Zealand’s most significant and cutting edge respiratory health research, and benefit Australians and New Zealanders suffering from lung disease.
Please CLICK HERE to make a donation or by filling out the Support TSANZ form. Once you have completed the form, please email TSANZOffice@thoracic.org.au.

4. Leave TSANZ a gift in your will

If you are interested in supporting TSANZ in the future, one way to do so is to leave TSANZ a gift in your will. Any support is greatly appreciated and will leave a lasting legacy.
If interested, please notify us by ticking the box on the Support TSANZ form. Once you have completed the form, please email TSANZOffice@thoracic.org.au. Alternatively, please call the TSANZ Office on +61 2 9222 6200.

New Zealand members are reminded that you are also able to make a tax deductible donation directly to the NZ branch. You can assist the NZ branch to provide services to members across NZ. If you make a payment via electronic funds transfer (EFT), please notify the TSANZ office so that we can arrange a receipt.
CLICK HERE to make a donation.

Thank you for your continued support of TSANZ.