Home 5 About us 5 Board of Directors & Subcommittees 5 History

History of the Thoracic Society of Australia

The Thoracic Society of Australia was established in 1960 and grew out of the Laennec Society, which had been formed in 1952 as a medical association with a focus on tuberculosis. The first scientific meeting, which marked the formal establishment of the Society, was held in Perth in 1961 with Geoffrey McManus, the last President of the Laennec Society, becoming the first Thoracic Society of Australia President.

Today TSANZ is the only peak body to represent all professional groups with an interest in improving knowledge and understanding of lung disease across Australia and New Zealand.From its original membership of 16, the TSANZ now has a membership of approximately 1700 members.

The Laennec Medal continues to be awarded to the President of the Thoracic Society of Australia and New Zealand on the completion of his/her term and marks the historical roots of the Society.

The late Dr Michael Burns, TSANZ Past President (1985-1987), was the volunteer historian of TSANZ for many years and compiled a comprehensive chronology of TSANZ events from 1960 to 2016. These were compiled into a document called “The TSANZ: Milestones in Their Histories”. 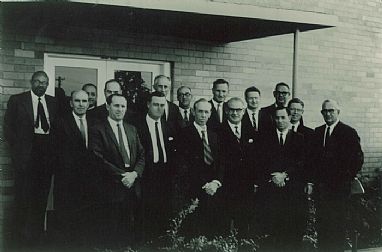 First meeting of the Thoracic Society of Australia, Perth, 1961

THE TSANZ: MILESTONES IN THEIR HISTORIES